Hi there miniature  fans and welcome to the first installment of Old School Gamers Miniature review.Let me first Introduce myself.My name is Mickey Leach and I have been into gaming and miniatures for over 30 years.I have painted for a large amount of miniature producing company's over the years such as Ral Partha, HeartBreaker, Grenadier to name a few as well eventually starting a small miniature company of my own in 2002 under the name of Eastern Front Studios.I have been a customer of miniatures for a good long time, collected and painted thousands of miniatures((having a full time job doing so in 15mm)) and know a goodly bit about them.So whats the goal you ask.?..Well to bring to the fans the most newly sculpted, plastic, metal, and resin miniatures in our gaming industry as well as upcoming new releases and whats HOT and whats maybe NOT as judged by my old miniature eyes based on price, use ability, design, ..etc....So it was it seemed to get some old friends of the miniature world to send me some to review.My first stop was our good friends at Reaper Miniature's.I contacted Ed Pugh and he thought this a wonderful idea, so a short time later I had a fresh batch of metal fresh off the printing press and eagerly started examining them all.So that said the first 16 will be entirely devoted to Reaper Miniatures.Much thanks to Ed and crew.
.
http://a2.sphotos.ak.fbcdn.net/hphotos-ak-snc7/s320x320/401215_10150498113891903_662346902_9161121_1525721709_n.jpg

16 lovely miniatures so without hesitation here we go with the first 4 miniatures that came out in Dec. of 2011. 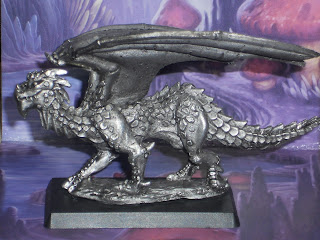 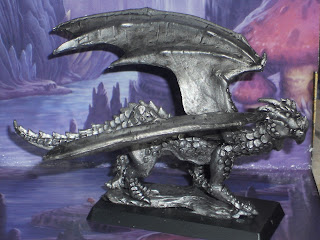 The very first thought on this Dragon was it gave me a flash back to smaller dragons I had collected from Grenadier back in the 80's. A very nice well sculpted Dragon sorta reminiscent of the style in the 3.5 Monster Manual made popular by Todd LockWood and other artists.The Miniature came in 3 parts a body and 2 wings on a sprue.Clean up was very easy with a small file and the miniature assembled very easily.The dragon measures 80mm nose to tip of tail.My only complaint with this piece is it is very top heavy and wobbly even after sanding the base and adjusting the wings.I first thought it was perhaps just my sculpt but after checking the Reaper site saw they had also added it to a more stable base. https://www.reapermini.com/graphics/gallery/4/65138_w_1.jpg

Overall I liked this little miniature for metal you are getting alot of dragon compared to similar plastic minis on the market again my only complaint was the base needs work to get it balanced: a solid 7.8 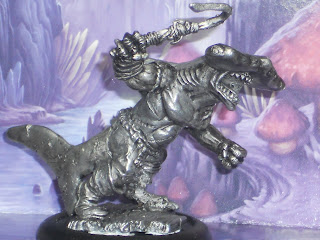 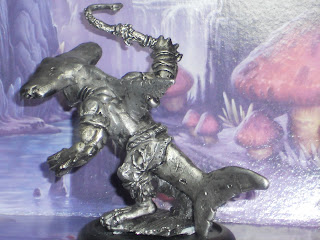 Having worked with Jason at my own company I can usually say nothing but good things about his sculpting.The miniature is a way cool Hammerhead shark wielding a crusted hook weapon. he comes in 4 parts body, 2 separate arms and tail section.He stands a imposing 56mm from his feet to the top of his weapon with a slightly leaning charging pose..maw agape like snarling or about to do a frenzied bite.he has alot of little details the painter or gamer can appreciate from the various scars all over his body to the little details that give him character like the rope belt, the metal ring in his dorsal fin, huge amounts of cool scars etc..along with having rips in his pants and missing one boot he is indeed one cool miniature.So now the not so good on this miniature..sad to say but the arm and tail have very bad gaps..left arm and right side of the tail that meets the clothes..and had a goodly amount of clean up on him to get the tail to fit properly and a major amount of mold lines..also under his body and along his body so i was needle filing a goodly bit on this fellow needlessly to say..the miniature is very top heavy so it really needs a base to support it which it didn't have..also I had to lean mine slightly forward as the end of the tail was lower then the planks..this all said still a great miniature if you don't mind the gap filling and etc.so again solid 7.5 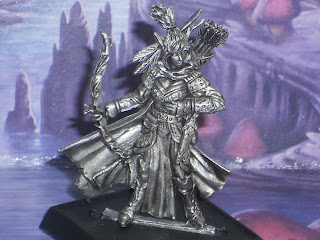 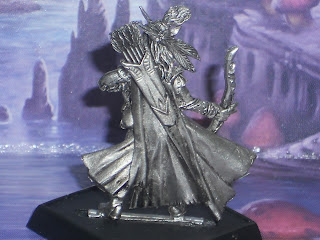 I must say this was my pick of the 4 she is just all round very cool anyone wanting a excellent Ranger or elf type character would highly enjoy this excellent Pathfinder miniature...loaded with tiny details such as her fingers sticking beyond the bow or the  feathers in her hair..this mini screams elf..and even has the nice longer ears so there is no denying she is a elf.I have to say I think this is the nicest miniature i have seen to date in hand from Patrick..truly a awesome job.She stands 35mm to the highest point on her hair.She comes in three pieces body, separate bow and separate quiver.Cleanup was next to nothing all though I did see tiny mold lines I missed once I snapped the pics..she came almost mint out of the package. solid 8.8 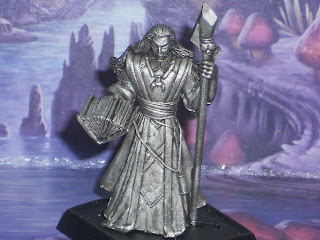 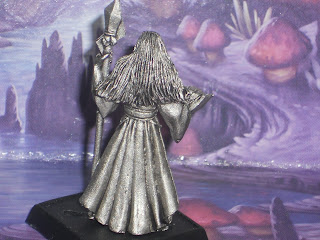 A very clean miniature again from Patrick..this fellow would make a excellent Wizard or Cleric to my thinking for anyone looking for a RPG character..he comes in 2 parts body(( he stands 36mm to the top of his head)) & with book..cleanup was next to nothing ..he packs a staff with some crystal at the top likewise his belt has a couple of little add-on's also..I would have liked to make seen a bit more add-on's on the back or some form of pattern on the robes again very nice clean work.solid 8

Thanks again for taking the time to read my reviews.
Mick leach 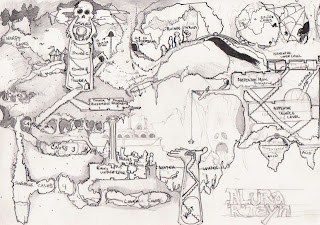 In other news from Eastern Front Studios www.easternfront-studios.net has started working on Pathfinder adventure modules to coincide with their miniatures. Here we see one concept map for a upcoming adventure to span several dungeon delves indeed.stay tuned for more information.
Posted by Old School Gamers at 2:29 AM 5 comments:

Reaper Miniatures supports the OSG forum.
So today I got a $200 certificate from a old pal at Reaper Miniatures (( Ed Pugh)) who was very happy to support us for miniature reviews.So that said I went about ordering everything Reaper released in Dec & Jan. https://www.reapermini.com/NowAvailable

Once the miniatures come in myself and couple of our metal miniature guys will review them and paint a few of the list up also.Below are a few I reviewed in the past.Thanks again & I look forward to this project. 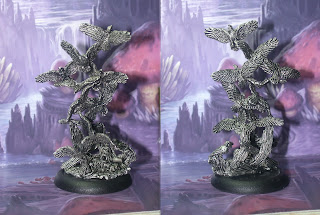 Posted by Old School Gamers at 3:44 AM 2 comments:

WELCOME TO THE OSG

Hi There, I'm Mick Leach & I run a fun Facebook site called the "OLD SCHOOL GAMERS". We are a fast growing community with over 700 members in a very short time with a ton of fun posts each day that covers everything  from Games of the past such as AD&D to new games, boardgames, movies, pc/consol games etc. The forum is more about the comradeship then competing with who has the most popular game.So that said we thought to add a BLOG to support us there and a base for our E-ZINE we are looking to start.
Mick
Posted by Old School Gamers at 5:04 PM 4 comments: